I love Italian food! That probably goes without saying. Italy is known for its food, so, it’s not surprising that one of the classic things to do in Florence is to take a cooking class. I’ve taken two at In Tavola at via dei Velluti 18/20r and I had a blast both times. Not only that, I will definitely try the recipes at home. There’s something about preparing a meal with a group of strangers in a test kitchen that inspires confidence, especially if the result is delicious. It also fosters a sense of camaraderie within the group which makes for a truly delightful time. There are many cooking schools in Florence to choose from. Some are extremely expensive. Others more modest. In Tavola was an excellent value for the money.

I decided to jump into the deep end first thing and try a 4 course dinner class. It cost me 65 Euro. Chef Helen was the guide and task leader for our multilingual group of 17 would be culinary experts. She taught us slicing tips, how to blanch tomatoes to remove the skins, and how to peel mushrooms. I learned that you never wash mushrooms. They are mostly water and washing them makes them mushy. You just peel off the outer layer of skin and have fresh, clean, mushroom underneath.  Who knew?! In general in this class, we peeled things I wouldn’t have and didn’t peel things I would have. It was very interesting. 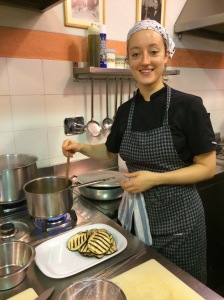 At my table were a French couple on a short holiday from Paris and two delightful, American woman on vacation exploring Italy. Our work station was a stainless steel table with drawers full of all the food preparation implements we would need and a four burner cooktop, At our table we also had all the ingredients for our meal.

Our first course was pasta. We prepared two types of gnocchi. Gnocchi are small potato dumplings. We prepared a classic potato gnocchi and a green potato gnocchi. I am a gnocchi fan from way back, so I was really excited for this course. While I’ve made gnocchi myself (once), I was looking forward to learning how to do it the Italian way. The only difference between the two types of gnocchi was that the green gnocchi had parsley. I found a new cooking toy I’ll need to get when I get home. It’s called a rice masher. We used it to shred the cooked potatoes. The recipes were very easy. You can either bake or boil the potatoes. If you use a rice masher, there’s no need to peel them, then blend with flour, cornstarch, egg, finely diced parsley and season with salt, pepper, and the secret ingredient, nutmeg. You then knead the dough quickly, roll it into a long string about ½ inch thick on a floured table and cut it into one inch pieces. Sprinkle it with flour to keep it from sticking together and then cook the gnocchi in rapidly boiling water for 2-3 minutes.

We topped the regular gnocchi with a tomato and garlic sauce. We quickly blanched the tomatoes in boiling water for 1 minute, then ran them under cold water to cool, and peeled them. We added two cloves of unpeeled garlic to the tomatoes in a pan with olive oil in the bottom, then seasoned with salt, pepper and pepperoncino (hot peppers) and sautéed for 10 minutes. Toward the end we added about 6 leaves of basil cut into strips. Chef Helen taught us to roll the leaves like a cigar and then cut thin slices. We added the basil at the end so as not to overcook it. We removed the garlic, added the pasta, tossed it all together (literally), and we were done.

For the green gnocchi, we did a simple, yet delicious sauce that I never would have thought of as a pasta sauce. We sautéed diced carrots, onions and celery in olive oil, cooking them until the onions were translucent. Then we added ground turkey and cooked it over high heat until browned. We added brandy and cooked it off, then water, and thyme, and rosemary wrapped in sage leaves and tied off so the packet could be easily removed later, chopped parsley, salt, and pepper. Ideally this sauce would cook for a couple hours, but as our time was limited, we did the cheater version and added a bit of tomato paste and called it good.

Me serving the gnocchi with tomato and garlic sauce

Our second course was turkey with herbs and saffron. First, we about ½ teaspoon if saffron into some vegetable stock to dissolve. Our  turkey was skinned, boned, and precut into two inch by two inch chunks for easy cooking. We coated them in flour, then pan friend them over medium heat in a skillet with olive oil and butter. In a separate pan, we sautéed the sliced mushrooms with olive oil and garlic. Once the turkey was browned nicely, we added the sautéed mushrooms and about a half cup of white wine which we let evaporate. Finally we added the stock with saffron and the herbs (bay leaves and rosemary), and a dash of salt and pepper. When everything was done, we garnished the dish with chopped parsley.

For dessert, we made tiramisu. To start with we mixed 3 egg whites with sugar and beat them until they were stiff and peaks formed. Then we gently stirred in mascarpone cheese and set it aside. We dipped lady fingers in a espresso/brandy mixture, then lined our dessert cups with them, topped with the mascarpone cheese mixture, repeated the steps and ended with cocoa powder sprinkled on the top layer of cheese. These we refrigerated an hour before eating.

The best part, after preparing our meal, we got to enjoy it together accompanied by a lovely In Tavola wine. It was an absolutely delightful time and the food was delicious, if I do say so myself. None of us were ready to leave when the meal was over. I think that is the sign of a successful experience. I strongly recommend it! Check out In Tavola at: http://www.intavola.org/ 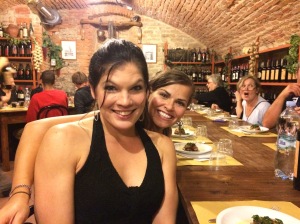